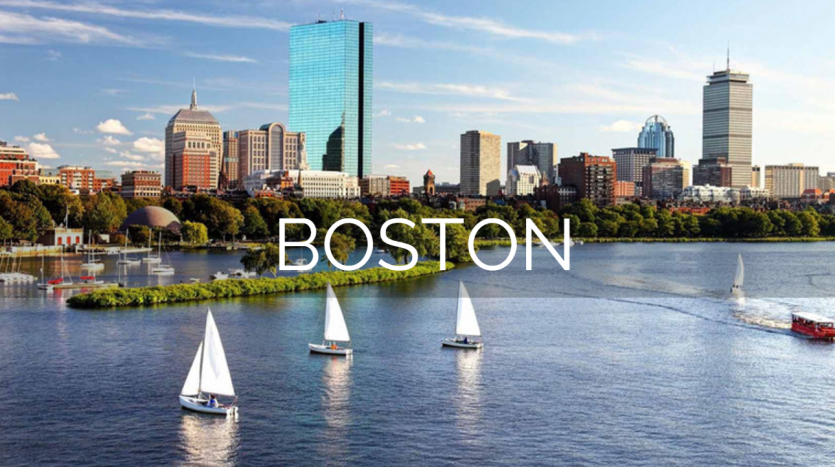 Boston: A Historical Haven
By Deanna Destito
As one of the oldest cities in the country, Boston, Massachusetts is rich in history and culture, making it one of the best places to learn about the United States while enjoying some New England charm.

Founded in 1630 by Puritan English settlers, the area has seen a few of the most notable moments in American history, such as our first public school, first subway system, and first public park, Boston Common.

It has also been home to some of the most famous names in our country, from political figures to Hollywood elite.
Boston Harbor
The waterfront is a mixture of residential and commercial businesses along a picturesque walkway lined with parks, art, and cafes.

Visitors can also tour the harbor by way of ferry, water taxi, or cruise boat.

Guests can rent house boats along the water and enjoy serene views of the shoreline while being close enough for easy access to food and entertainment.

The North End of the harbor includes a replica of one of the original ships from The Boston Tea Party along with a reenactment of the famous December night.

It is also home to Christopher Columbus Waterfront Park and Long Wharf, which acts as a launching point for whale watching, historical tours, and other exciting activies.
Fenway Park
Home to the Boston Red Sox, Fenway Park has seen its share of exciting achievements in baseball since 1912.

Fans of America’s favorite past time should not pass up the chance to take in the stadium’s architecture as well as its legendary landmarks like Pesky’s Pole, the right field foul pole named for Johnny Pesky, a former Red Sox great, and the Green Monster wall in left field, a 37-foot tall giant in the park.

The oldest park in the US, Boston Common is great for relaxing on a warm day and setting up a picnic.

Frog Pond also offers a spray pool during the summer as well as a skating rink in the colder months.

Next to Boston Common is the Boston Public Garden, another beautiful park located in the center of the city.

The park is home to Victorian-style monuments and statues along with a famous statue of George Washington.

In the garden’s center, enjoy Swan Boats and ride around the lake.

BOOK A HOUSEBOAT RENTAL IN BOSTON

From $ 275 Per Night
House Boat Rentals In Boston Massachussetts The White Elephant Floating Inn is a one-of-a- [more]
Boston: A Historical Haven By Deanna Destito As one of the oldest cities in the country, B [more]
32full info
House Boat Rentals – Bethany
more listings
For history buffs, Boston Common is also a starting point for the Freedom Trail, two and half miles of area that connects Boston’s most famous historical sites such as Faneuil Hall Marketplace, the Paul Revere House, and Old North Church.

Although you can traverse the trail on your own, the Freedom Trail Player tour provides walking tours with guides dressed in 18th century costumes.
Museums
Boston boasts a variety of museums for any age and taste.

The Harvard Museums and Glass Flowers consist of four museums (the Peabody Museum of Archeology and Ethnology, the Mineralogical Museum, the Museum of Comparative Zoology, and the Botanical Museum) that house treasured items from Lewis and Clark as well as artifacts from local Native American cultures and a plethora of fossils including a 25,000 year-old mastodon.

The complex offers more than 3,000 models of different species of flowers and plants in some of the most realistic glass sculptures you’ll ever see.
Boston is also home to one of the top art museums in our nation, the Boston Museum of Fine Arts.

From Egyptian art to the Impressionists, the museum’s inventory spans centuries of fine art, glassware, statues, and sculptures.

Whether it’s history, art, or just scenic views, Boston is the perfect location to find everything you need, from big city convenience to serene New England beauty.

The Bahamas: Adventures on Land and in the Sea
The Texas Gulf Coast